Jane’s top tip for aspiring authors: The best bit about being a writer is the writing. Don’t get too stressed about whether you’re being published, or being noticed, or any of that. Nothing is more fun than the writing itself.

Jane Rawson is the author of two novels – A wrong turn at the Office of Unmade Lists (2013 Transit Lounge), which won the Small Press Network’s 2014 ‘Most Underrated Book’ Award, and From the wreck (2017 Transit Lounge) – as well as a novella, Formaldehyde (2015 Seizure), which won the Seizure Viva La Novella Prize. She is the co-author of The handbook: surviving and living with climate change (2015 Transit Lounge), a practical, personal guide to life in a climate-changed Australia written with James Whitmore. Her short fiction has been published by Sleepers, Overland, Tincture, Seizure and Review of Australian Fiction. She works for the government and lives in Melbourne’s west.

For more information about Jane and her books, visit her website.

Why do you write? My head has always been full of stories – there’s a lot of pressure from inside my brain to get them written down. I enjoy being by myself, and I love being deeply immersed in a world I’ve invented – it’s an almost physical thrill when it’s going well. And I’m a huge reader, a lover of words, and I really enjoy all the chances I get to talk about books and writing thanks to being a writer.

What would you be doing if you weren’t a writer? Most of what I do now is not writing (or at least, not my own writing) – I have a full-time office job as a communications adviser, I spend a lot of time just hanging out with my husband, I play the clarinet, I read a great deal. But if I stopped shutting myself away in a room to write and had more spare time, I’d like to think I’d devote it to environmental activism.

What was your toughest obstacle to becoming published? My writing! My stories are unconventional and the ways I tell them are a little experimental. They’re not easy to classify or explain and it took a while to find a publisher who thought that was a strength rather than a deal-breaker.

What’s the best aspect of your writing life? Creating something entirely new out of nothing but my own brain – it really works only rarely, but when it does it’s one of the best feelings in the world.

What would you do differently if you were starting out now as a writer? I’m pretty happy with the way my writing is developing and the results I’m getting. Perhaps the only thing I’d change would be having studied something at uni that would mean I could work short hours for loads of cash, so I’d have more time to write. Programming, maybe?

What do you wish you’d been told before you set out to become an author? There are a lot of weird, bad feelings tied up with being a writer once you get published (as well as the good ones you expect). Be prepared.

What’s the best advice you were ever given? Don’t be so harsh on your first draft – you don’t expect a little baby to be a concert pianist, why do you expect your first draft to be a great novel? Just get on with the writing and forget about the criticising.

From the Wreck tells the remarkable story of George Hills, who survived the sinking of the steamship Admella off the South Australian coast in 1859. Haunted by his memories and the disappearance of a fellow survivor, George’s fractured life is intertwined with that of a woman from another dimension, seeking refuge on Earth. This is a novel imbued with beauty and feeling, filled both with existential loneliness and a deep awareness that all life is interdependent.

‘It’s hard to find the right words to praise this novel. I think we need a whole new critical vocabulary to be invented. Rawson recreates a vanished historical world with utterly convincing characters as well as inhabits the mind of a cephalopod alien and make us feel, in both cases, yes, that’s exactly how it is. Jane Rawson’s writing is mysterious, chilling and tender. The book is a sort of miracle.’    Lian Hearn

‘Rawson’s clear, lyrical prose—with its deep undercurrent of empathy—creates a breathtaking and revelatory reading experience. From The Wreck borrows from science-fiction, history and magical realism, forming a whole that is utterly unique and distinctly Australian. This is a masterpiece.’ Bookseller & Publisher 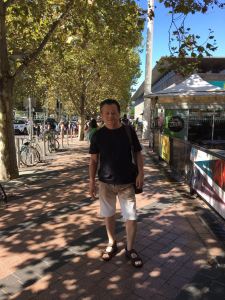 OUYANG’S TOP WRITING TIP: If you really love writing, persist in it. Do it differently, always differently. If you like going against the grain, ignore this.

Ouyang Yu, now based in Melbourne, came to Australia in mid-April 1991 and, by late February 2017 has published 85 books of poetry, fiction, non-fiction, literary translation and literary criticism in English and Chinese. He also edits Australia’s only Chinese literary journal, Otherland.

He was nominated one of the Top 100 Most Influential Melbournians for 2011 as well as the Top 10 most influential writers of Chinese origin in the Chinese diaspora.

He is now the ‘Siyuan Scholar’ and professor of English at Shanghai University of International Business and Economics, China (since 2012).

In 2016, he won an Australia Council grant for writing a book of bilingual poetry and a special award from the Australia-China Council for ‘his contributions to Australian Studies in China through major translations and original works of scholarship’.

Why do you write? I never ask such questions. When I first started, some 30 years ago, at about 25, I just wanted to be a writer and I expressed my doubts about the possibility in my writing. Now if you ask me, I guess I’ll simply say that writing is part of my life, just like eating, shitting and breathing. How can you imagine not doing any of those for a single day?

What would you be doing if you weren’t a writer? Then I’d be a non-writer, meaning a reader. But that’s half-writer already.

What was your toughest obstacle to becoming published? I have a personal motto: Write till it’s unpublishable. Why? Because I want to explore all sorts of ways of writing, not just simply telling a story that sells. As I come from a migrant and Asian, meaning mainland Chinese, background, I defy the assumption that people like me can only write memoirs, autobiographies or things about their families. In China, I’m known as a xianfeng shiren (avant-garde poet) or xianfeng zuojia (avant-garde writer), and I’m valued for that. In Australia, however, I’m not recognised for that and I’m rejected for that because my writings are deemed unmarketable. Perhaps I have to write a memoir telling of my miserable stories living under Communism in order to get published. Perhaps they’ll have to wait till I die.

What’s the best aspect of your writing life? I don’t know what you mean by ‘the best aspect’. Writing is an act of dying. That’s all.

—the worst? I’ve got more stuff that’s not accepted for publication than what’s already published, 85 titles in both English and Chinese languages, in total. The Australian rejection and the Chinese rejection are matched in their intensity and in their fears.

What do you wish you’d been told before you set out to become an author? I wish I had been told that market was the real goal you should aim at. But, then, as a poet, I’d certainly go against it; as a poet, I go against the grain, grain of any sorts. You give me any advice, I’d ignore it. I’ll find my own ways. Let me fail, please.

What’s the best advice you were ever given? If you think success is the only thing you want, well, what can I say? Writing is failure, in the end.

A novel by Ouyang Yu

William ‘Billy’ Sing was born in 1886 to an English mother and Chinese father. He and his two sisters were brought up in Clermont and Proserpine, in rural Queensland. He was one of the first to enlist in 1914 and at Gallipoli became famous for his shooting prowess.

In his new novel, Billy Sing, Ouyang Yu embodies Sing’s voice  in a magically descriptive prose that captures both the Australian landscape and vernacular. In writing about Sing’s triumphant yet conflicted life, and the horrors of war, Yu captures with  imaginative power what it might mean to be both an outsider and a hero in one’s own country. The telling  is poetic and realist, the author’s understanding of  being a Chinese-Australian sensitively informs the narrative.