William’s top tip for aspiring authors: Find the thing that is most important to you to say, and that you are able to say at present. 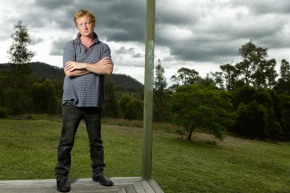 William Lane lives in the Hunter Valley, NSW, where he is raising three children. After completing an Honours degree in Australian
literature, he travelled and worked in a number of different jobs. In addition to reading and writing, his interests include music and education. He has completed a doctorate on the Australian writer Christina Stead, and has had several critical articles on Stead published in literary journals. He is the author of three other novels: Over the Water (2014), The Horses (2015) and The Salamanders (2016).

Why do you write? I write to understand. I explore questions that bug me, because something about them does not seem to add up. A story is a form to tease out questions important to me.

What would you be doing if you weren’t a writer? Being very unhappy.

What was your toughest obstacle to becoming published? Perhaps believing I had a finished work, which I thought worth trying to publish.

What’s the best aspect of your writing life? The privilege of being published, and of having a readership, even if it is only small.

…the worst? The vulnerability of being published. Once your name is on a public work, you have to wear it.

What would you do differently if you were starting out now as a writer? I would have more faith in following my intuition than I had.

What do you wish you’d been told before you set out to become an author? I wish I had been more aware of the differences between publishers; there are a lot of publishers, but only some will be a good fit for your work.

What’s the best advice you were ever given? Time is a writer’s best friend.

How important is social media to you as an author? I’m not very aware of how important it is, as I don’t understand social media well. I don’t have a blog or a website, but I am aware enough to know I probably should. Social media makes me feel socially awkward, which is not a feeling I really want to be reminded of! The email form interests me. I have a few stories composed entirely of emails.

Do you experience ‘writer’s block’ and if so, how do you overcome it? If I have nothing to say, which is quite often, I don’t write. I see no reason to push it. So I suppose I simply don’t label a time of not writing as writer’s block. I just see it as a fallow time – or, more likely, a time to research a future work or polish an old one. In other types of writing, such as academic writing, I do experience writer’s block, which in that case is shying away from doing the hard yards, the slog, of getting out an idea. Writing stories should hopefully never be a slog.

How do you deal with rejection? I sulk. But then it goads me. I only become more determined to revisit the rejected manuscript and make it better. It’s all part of the game. Every rejection has led to a better work.

In three words, how would you describe your writing? It’s just play.

If you had a chance to spend an hour with any writer of your choice, living or dead, who would it be and what would you most like them to tell you about living a writing life? Could I divide my time between two writers? Emily Bronte – it would be fascinating to observe how she interacted with the world, to try to get an idea of how she came to understand so much so young. And Jane Austen – she would just be wicked fun.

Kenric is an oddball advertising eccentric who possesses an
unusual gift for language. The brands he names, sell. Yet he
comes to believe advertising uses language too cynically.
He is inspired by Maria to abandon the corporate world
and establish a small residential community called The
Word. The idealistic community relocates from Pittwater to
a warehouse in industrial Mount Druitt, gathering about it others concerned with the misuse of language.
The Word is both a charming ensemble piece of unforgettable characters, and an astute and humorous exploration of the ways in language beguiles, creates connections, but also misleads. The novel parallels current world trends, while evoking
with candour Sydney’s watery beauty and suburban harshness.

It is available here.

One thought on “Meet the Author: William Lane”