Tobias’s top tip for aspiring authors: Don’t look for ‘tips’ or advice; cultivate your own practice. 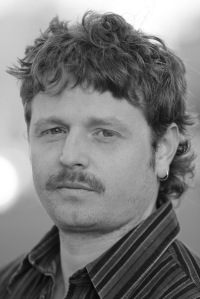 Tobias McCorkell is a writer and academic whose fiction and non-fiction interrogate the class, gender and generational divides of Australian culture. He also writes light non-fiction, humour and gift books under the name Tobias Anthony.

The manuscript for Tobias’s first novel, Barely Anything, was awarded the University of Melbourne/Affirm Press Prize for Creative Writing in 2015. In 2018, Tobias appeared at the Melbourne Emerging Writer’s Festival. In 2019, he was accepted into residency programs both domestically and internationally, including a Varuna Residency Fellowship and a Leighton Artists Studios Residency at the Banff Centre for Arts and Creativity in Canada.

Tobias has been teaching creative writing at the University of Melbourne since 2012.

Find out more about Tobias at https://www.tobiasmccorkell.com/

Why do you write? To tell the truth and connect with people. I’m mostly dissatisfied with how people interact with one another, there’s always a barrier, but writing strips that barrier away and the possibilities for connection and intimacy – even with strangers, with people who you’ve never met – are suddenly limitless.

What would you be doing if you weren’t a writer? I’d like to open a florist, or at least work in one. Probably, though, I’d be a schoolteacher like everyone else in my family.

What was your toughest obstacle to becoming published? Time. There’s just no way around it but getting to the required skill/competency level takes about ten years or more, and years of persistent effort. Except for a few freaks or ‘young’ authors being exploited by publishers keen to trade in on youth or some novelty aspect of their identity, the vast majority of people aren’t publishing in their twenties.

How involved have you been in the development of your book? Did you have input into the cover? Really involved! I’m lucky being published by Transit Lounge, because they were keen to see me publish the book I wanted to publish, and so I felt supported during the editing process and like I was in control of the situation. This doesn’t always happen, so I’ve had a dream run with this book, though I’d say it comes down to how professionally you behave and how well you understand your novel as well as the industry. And yes, I helped design the cover – it was almost exactly as I imagined – so I’m to blame if you dislike it.

What’s the best aspect of your writing life? Getting to write. It’s all I want to do, really, apart from watch horror movies and read. If I could find a way to make money off the other two, I’d be set.

—the worst? The administrative tasks: emails, applying for grants/funding/residencies, submitting your work, doing Q+As (just kidding!), etc. It takes more time than it ought to, and mostly your applications are rejected anyway, so it can really feel like a waste, plus it eats into your concentration and focus on the ‘real’ stuff – the writing itself.

What would you do differently if you were starting out now as a writer? I would’ve spent less time writing and more time reading and trusted that Time would take care of the rest. I wasted precious years stressing about the quality of my work and wondering if/when I’d be published. If I’d been less career-driven I would’ve had space for other things, too, like prioritising my own happiness, which means I would likely have left my relationship a long time before it ended … Too dark?

What do you wish you’d been told before you set out to become an author? I’m really not sure about this one … I can’t stress the importance of becoming a good editor enough and learning the ropes on the technical side of things. But I was always told this and just never listened. But then, my focus was elsewhere, and I got a handle on that part eventually.

What’s the best advice you were ever given? I was once asked ‘What’s a voice that isn’t being voiced?’ and it’s always stuck with me as a way towards conceptualising what I want to do next. My writing isn’t especially original, I’m a fairly traditional writer in some respects, but I can aim to be good and to write something I’d like to read that perhaps isn’t readily available.

How important is social media to you as an author? Not very, though I do tweet relevant information if I have anything to promote and have, only this month, created a Facebook account to do likewise. But I don’t have a big following and doubt it’s of much use. I can’t get past the long-held belief that social media is a disease for the mind, adopted by depressives and the undertalented in a bid for underserved attention.

Do you experience ‘writer’s block’ and if so, how do you overcome it? Not really, I think it’s a bit of a myth, a bit like that one about how everybody has a book in them. I think most people don’t have a book in them, and these are probably the same people walking around convinced they’re suffering from writer’s block. Regardless, planning helps – writers should spend about as much time simply thinking about their project and planning as they do writing.

How do you deal with rejection? Booze and good conversation; so, hitting a bar with a mate or date. Sex, too, if I can get it.

In three words, how would you describe your writing? Oh. My. God …

If you had the chance to spend an hour with any writer of your choice, living or dead, who would it be and what would you most like them to tell you about living a writing life? Jean Rhys. And only on the condition that we wouldn’t waste a single second talking about writing.

Everything in its Right Place

Coburg, Melbourne. Ford McCullen is growing up with hismother Deidre and his Pop and Noonie in ‘The Compound’, a pair of units in the shadow of Pentridge prison. His father, Robert, has left them to live in the bush with his new male partner. Nobody is coping.
When Ford’s paternal grandmother Queenie’s good fortune allows him to attend a prestigious Catholic private school on the other side of the river and to learn the violin, Ford finds himself balancing separate identities. At school he sees himself being moulded into an image that is not his own, something at odds with the rough and tumble of his beloved north.
Crumbling under the weight of his family’s expectations and realising that he just might be the only adult amongst them, Ford embarks on a quest for meaning while navigating the uncomfortable realities of his father’s life, his mother’s ongoing crisis, and the pillars of football and religion, delving
ever deeper into a fraught search for the source of the ‘McCullen curse’.
Everything in its Right Place tackles themes of class, love and sexuality with humour, truth and grit. It is a story of the legacies and dilemmas that families bring, of how we all must find our own way.