Bernice’s top tip for aspiring authors: I think it’s important to know from the very beginning what you want to achieve and what you want to get from the process of doing all that writing. Why are you writing, who’s it for and what are your expectations for the outcome? I’d also say that it’s critical to listen to the tiny little voice, the irritating one that whispers to you that something isn’t quite right. In my experience, what it’s trying to tell you always turns out to be important. That voice is the reader in you, so you need to listen. 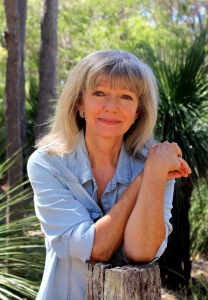 Originally from the Atlantic coast of England’s far southwest, Bernice Barry moved to Margaret River in 2001 and has spent the past 14 years creating a native garden in the bush. In 2011, she closed the door on a career in international curriculum innovation, as an adviser on the teaching of literacy, to focus on her lifelong interest in writing, literature and history.

In 2012, her short story Mornings Like This won the first regional writers’ award in the Margaret River Readers & Writers Festival short story competition. In March 2015, after 11 years of research, her biography of botanist and local settler Georgiana Molloy was self-published in Western Australia. In March 2016 the book was published by Pan Macmillan in Australia and New Zealand under the Picador imprint: Georgiana Molloy: the Mind that Shines.

Why do you write? I write because when I’m doing it I feel the best I ever feel, as if I’m being really me. It’s not a loud, elated feeling like happiness, more a kind of deep and comfortable contentment.

What would you be doing if you weren’t a writer? Probably trying to tell stories in other ways so mostly creative things. I love gardening and would definitely spend a lot more time digging, weeding, planting, feeding. That always feels nearly as good to me as writing and I lose my sense of time passing in just the same way. I love teaching too. You see new learning happening in front of you and that feels so rewarding and exciting.

What was your toughest obstacle to becoming published? Lack of confidence was probably the biggest obstacle because until that’s overcome you can’t move forward. Emotional exhaustion has to be on the list too. Battling your fears and insecurities and sticking to your guns can be hard to maintain as the months go by.

How involved have you been in the development of your book? Did you have input into the cover? The first edition of my book in 2015 was self-published so I made all the decisions and briefed the artist and designer we chose to do the cover, Lauren Wilhelm. Her beautiful portrait of Georgiana Molloy was included in the amazing design she came up with. It was very popular and when the Picador edition was released in 2016 they kept the front cover virtually the same. I was really pleased with the subtle ways they improved and enhanced the book without really changing the content.

What’s the best aspect of your writing life? There are good things about every part of the process. Perhaps that’s why it’s so pleasurable. Facing a blank screen and deciding on the first words of a book or a chapter or even a page can feel like a thrill because so many words are just waiting to be found and chosen. Editing what I wrote the day before and knowing I’ve improved it feels rewarding in a simple way. Sometimes I spend hours searching for the right word to convey what I want a reader to imagine and when I think I’ve got it right, that’s a good feeling too – especially if I still think so the next day!

—the worst? Those times of self-doubt are the worst and I’m learning that most writers experience them so knowing I’m not alone does help. There are times when I suddenly believe that I’m writing absolute rubbish. This happens most often when I’ve been writing more quickly than usual. I’m a very slow writer which is good in some ways because a lot of the editing is done along the way, but when the words flow more quickly I don’t have the confidence to believe it can still be good writing. I suppose if it ever feels too easy, I don’t trust the quality.

What would you do differently if you were starting out now as a writer? Start sooner. I always knew I loved writing but I thought I was too busy doing other things. A long lifetime of collecting bits of writing and never finishing anything or sharing them with anyone else feels like a waste now. I could have had so much more fun. More practice might have made me a better writer by now as well. I’d also connect myself with other writers sooner. I’ve found the companionship and support of the writing community to be invaluable but I didn’t really think of myself as a writer for a long time so I didn’t join in at first, probably the time when I most needed it.

What do you wish you’d been told before you set out to become an author? Write what you write, the way you write it and don’t try to imitate or write in a way that doesn’t come naturally to you. Don’t pretend to be a writer you’re not. Readers will find you out.

What’s the best advice you were ever given? Many years ago a very well-known author read something I’d written and gave me some feedback. She said, ‘Write what you know.’ I understand now what she meant. It doesn’t mean you can’t write well if you have to research a place you’ve never visited or a lifestyle you haven’t lived. It’s about writing what you understand and believe in.

From the refined beauty of 19th century England and Scotland, to the dramatic landscape of the West Australian coast, Georgiana Molloy: The Mind That Shines gives new insight into the life of this pioneering botanist. Following a swift marriage, Georgiana and Captain John Molloy, a handsome hero with a mysterious past, emigrated to Australia among the first group of European settlers to the remote southwest. Here, despite personal tragedy, Georgiana’s passion for flora was ignited. Entirely self-taught, she gathered specimens of indigenous flora from Augusta and Busselton that are now held in some of the world’s leading herbarium collections.

Using Georgiana’s own writings and notes, accompanied by full-colour pictures of some of the stunning plants mentioned throughout, Bernice Barry reveals a resilient, independent woman of strong values, whose appreciation and wonder of the landscape around her become her salvation, and her legacy.

The book is available from Picador: http://www.panmacmillan.com.au/author/bernice-barry