John’s top tip for writers: Never give in. 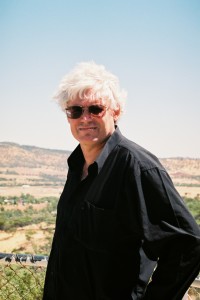 John Kinsella is the author of more than 30 books. His many awards include the Australian Prime Minister’s Literary Award for Poetry and the Victorian Premier’s Award for Poetry. His most recent works include the poetry volumes Drowning in Wheat: Selected Poems (Picador, 2016) and Open Door (UWAP, 2018). Story collections include Crow’s Breath (Transit Lounge 2015) and Old Growth (Transit Lounge, 2017). Recent novels are Lucida Intervalla (UWAP, 2018) and Hollow Earth (Transit Lounge, 2019). He often works in collaboration with other poets, artists, musicians, and activists. He is a Fellow of Churchill College, Cambridge University, and Professor of Literature and Environment at Curtin University, Western Australia.

Why do you write? Because it’s how I best communicate and because I feel writing can offer alternative directions for thinking and behaving.

What would you be doing if you weren’t a writer? Unimaginable. But I would still be trying to stop forests being destroyed and working towards justice and rights issues. If I didn’t write, I’d still be a reader. Reading is more important to me than writing. Reading and trying to stop the damage in whichever non-violent way I can.

What was your toughest obstacle to becoming published? Early on, probably my own disruptive and turbulent behaviours.

How involved have you been in the development of your books? Did you have input into the covers? I am always involved in the making of my books. Cover designs are usually the choice of the publisher, but I get some input and in the end it’s always a collaborative effort, even if it’s a matter of choosing which version from the array the designer has come up with. In this case, one of my brother’s artworks was used. Many of my covers have been designed around his unusual and indelible art.

What’s the best aspect of your writing life? That it’s an ongoing process — that my work in one way or another, even across genres, is interconnected, to my mind at least!

—the worst? I like proofs because I don’t like errors — or if there are ‘errors’, I want them to be intentional and to know what they’re about… but my eyes get strained by the time the third pass proofs are signed off on! So proofs are a conundrum!

What would you do differently if you were starting out now as a writer? Start sober. I’ve been sober for almost a quarter of a century now since giving stuff up, but I wish I’d been sober from the beginning of my writing life.

What do you wish you’d been told before you set out to become an author? Oh, nothing really — one finds one’s own way, whatever that is.

What’s the best advice you were ever given? Never give in.

What’s your top tip for aspiring authors? Never give in.

How important is social media to you as an author? Not at all — I think it’s a delusion.

Do you experience ‘writer’s block’ and if so, how do you overcome it? I switch from genre to genre to avoid it. If I can’t write, I walk or (continue to) work to save the environment (which I also do when I can write). There’s always too much to do — no time to worry about those kinds of blockages!

How do you deal with rejection? It’s part of a writing life. I accept it and move on and try again. If I believe in a piece of work, I believe in it no matter what. I like critical input, but I also know myself as a writer, I think. Either way, I don’t give up on something, I keep working at it.

In three words, how would you describe your writing? Strange, specific, activist.

If you had the chance to spend an hour with any writer of your choice, living or dead, who would it be and what would you most like them to tell you about living a writing life? A technical poetry discussion with John Milton would be interesting, though we’d run into problems with his tacit and less than tacit approval of violent acts of correction. Novelist? Probably Carson McCullers… an hour with her would be intense. Her writing life was complex… I am not sure what I’d want to be told about it other than what she’d hope to have written if she’d had a longer life. Maybe she wouldn’t have known.

Fascinated by caves and digging holes since childhood,
Manfred discovers a path through to another realm via a
Neolithic copper mine at Mount Gabriel in Schull, Ireland.
The world of Hollow Earth, while no Utopia, is a sophisticated
civilisation. Its genderless inhabitants are respectful of
their environment, religious and cultural differences are
accommodated without engendering hate or suspicion, and
grain not missile silos are built. Yet Ari and Zest accompany
Manfred back to the surface world. ‘Come with me and see
my world.’
So begins an extraordinary adventure in which the three
wander the Earth like Virgil’s Aeneas, Ari and Zest seeking
re-entry to their own world. The Hollow Earthers are shocked
at the cruelty and lies of the surface world, the dieback
spreading through the forests. Yet they are seduced by the
world’s temptations.
Kinsella’s parable draws on a rich tradition of Hollow Earth
literature and science fiction including Bradshaw’s The
Goddess of Atvatabar (1892). With strange beauty, its alluring
trajectory vividly captures our 21st century world in crisis.
Like Manfred we are often blindly complicit in the earth’s
downfall. ‘Happiness is under our feet.’ sings the narrator in
this passionate, layered and compelling new novel.