DON’S TOP WRITING TIP: Know what your offering is, and be true to your market. Don’t be put off by people who don’t ‘get’ you, especially the ones who haven’t done anything like what you’re attempting to do. 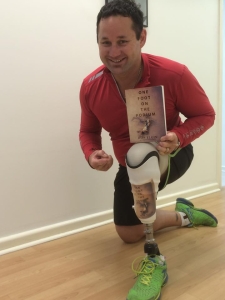 Don Elgin was raised in the NSW town of Tocumwal. Being born without the lower portion of his left leg was not a barrier for this boy who would make his first Australian team at 18 years of age.

Don went to the 1994 International Paralympic Committee World Athletic Championships in Berlin, where he won a gold medal as part of the 4x100m relay team. Following this event his focus moved from the sprint events to the Pentathlon – five events: long jump, shot put, 100m, discus and 400m.

Don held a Victorian Institute of Sport Scholarship for 12 years. He competed in the Sydney 2000 Paralympic Games where he won bronze in the Pentathlon. Don continued to train towards his ultimate goal of being number one in the world, in the below knee amputee Pentathlon. He moved a step closer to his goal when he finished with a Silver medal at the 2002 IPC World Athletic Championships. In 2004 Don became a triple Paralympic medalist with one silver medal in the 4x400m relay and two bronze medals one in the Pentathlon and one in the 4×100 at the Athens Paralympic Games.

After 2004 Don transferred the skills he learnt as an athlete and applied them to business,  establishing StarAmp Global to support and encourage athletes facing similar challenges to his own.

In 2012 he took over the role as the team manager for the Australian Paralympic Athletics Team in London.

At 38 Don decided to come out of retirement and set his sights on representing Australia in the 2014 Commonwealth Games. He achieved his goal and continues to inspire his family, athletes and those around him to believe that anything really is possible. Find out more about Don here.

Why do you write? As a motivational speaker, I’m fortunate in that I connect regularly with rooms full of people and get on-the-spot feedback. But it’s awesome how a book can connect you with people all round the world – on trains, in bedrooms, on breaks at work. Writing has allowed me to share with people who aren’t in my audience when I’m presenting as a speaker.

What would you be doing if you weren’t a writer? I’m very fortunate to be one of the few people on the planet who enjoys every day at work. I truly get excited when I’m busy. It’s my passion to help people find ways to get more from their own lives. Writing helps me do this: if I wasn’t writing, I’d be spending more time creating ways to connect with people.

What was your toughest obstacle to becoming published? Self-doubt. We humans all have a voice in our heads that unfortunately can be really good at highlighting the negative things about us. Learning how to process those thoughts and move on to a much more positive and proactive headspace helped me get on with the business of becoming published.

What’s the best aspect of your writing life? It’s awesome when people take the time to highlight their thoughts on your work, be it by sharing it in their networks or by writing to me to say ‘well done’ or to thank me. It’s a beautiful thing to be able to have a positive impact on people’s lives.

— the worst? The worst aspect by far is my terrible spelling: this is the reason I have an amazing editor who I work very closely with. I was jumping out of my skin with the discovery of SpellCheck.

What would you do differently if you were starting out now as a writer? I think I should’ve backed myself more often towards the beginning. I would avoid procrastinating at the first sign of doubt.

What do you wish you’d been told before you set out to become an author? “It will get tough. It will also get frustrating when at first you see little return for your effort.” At least then I would’ve known what I was letting myself in for. I still would have gone after it, but the reality would have been clearer.

What’s the best advice you were ever given? You only get one crack at this, so don’t sit around and wait. Get off your bum and go after it.

One Foot on the Podium

If you’re likely to buy only one book this year, make sure it’s a ripper. Make it one about a boy from the bush who’s hell-bent on becoming an elite sportsman. Be sure it’s a true story, with ups and downs and plenty of fun times you can relate to. An inspiring insight into triumph over adversity probably won’t go astray either.

The one book you should buy this year tells the true story of a boy with a couple of missing body-parts and a very naughty streak that gets him in and out of trouble with his parents, school teachers and the police on his journey to the peak of Paralympic athletic competition. The one book you should definitely buy this year is One Foot On The Podium, by Don Elgin (with Kevin Moloney).

Don Elgin: One Foot On The Podium is not just the rags-to-riches story of a poor disabled boy who becomes an elite athlete. It’s a tell-all tale laced with his natural humour and just enough larrikinism to make him loveable. The way Don tells his story is the reason he’s one of the most entertaining and engaging speakers on the Australian circuit today.